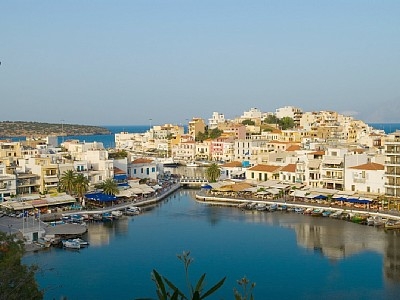 Agios Nikolaos Agios Nikolaos, capital of the Prefecture of Lasithi, is one of the most highly developed tourist towns in Greece. It lies along the west of the Mirabello bay. The sea in Agios Nikolaos is superb and the surrounding area of the city is noted for its sandy beaches and beautiful bays.  The landmark of the city is a small lake, known as "Voulismeni" that is located in the centre of the city, at the foot of the cliffs. Its shape is circular with a diameter of 137m. According to the mythology, the goddess Athena used to take her bath in this lake. The depth of the lake is 64 m and was connected to the sea only recently, with a canal opened at 1870. It is an especially picturesque site with many open-air cafes and restaurants along the bank.  Small boats leave the harbour to visit the Venetian fortress of Spinaloga, near Elounda. Every summer the Municipality of Agios Nikolaos organizes cultural events, music and dance events, theatrical performances, exhibitions, shows.  Agios Nikolaos also possesses the second finest Archaeological Museum in Crete, where splendid archaeological findings from throughout the Prefecture of Lasithi are exhibited. Spinaloga  Spinaloga is a small rocky islet, in the entrance of the lagoon. The name Spinaloga is Venetian (Spina=thorn, lcolor: rgb(85, 85, 85); font-family: Arial, Verdana, Helvetica, sans-serif; line-height: 15px; " /> It used to be one of the most powerful fortresses of the Venetian Crete, and it was never conquered. Its high walls were built in 1579 and are preserved today intact. In 1630 it had 35 cannons.  For half a century after the Turkish conquest of Crete, Spinaloga remained in the hands of the Venetians and was a refuge for many Christians who fled there to escape from the Turks. In 1715 the islet was handed over to the Turks with the conclusion of a treaty. From 1912 to 1958 the islet served as a sanatorium for the lepers of Crete. Today the entrance is free for the visitors who are attracted by its history and architecture.

* Our Guides are LICENSED and Members of the Union official Guides in Athens. * Our Drivers are Professionals and English speaking.